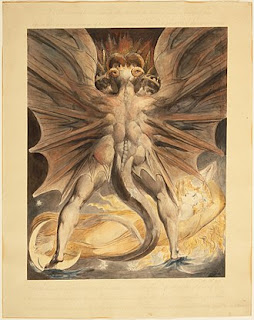 The Great Red Dragon Paintings are a series of watercolour paintings by the English poet and painter William Blake, painted between 1805 and 1810.


And behold a great red dragon, having seven heads and ten horns, and seven crowns upon his heads. And his tail drew the third part of the stars of heaven, and did cast them to the earth.


“Evidence is always partial. Facts are not truth, though they are part of it – information is not knowledge. And history is not the past – it is the method we have evolved of organising our ignorance of the past. It’s the record of what’s left on the record. It’s the plan of the positions taken, when we to stop the dance to note them down. It’s what’s left in the sieve when the centuries have run through it – a few stones, scraps of writing, scraps of cloth. It is no more “the past” than a birth certificate is a birth, or a script is a performance, or a map is a journey. It is the multiplication of the evidence of fallible and biased witnesses, combined with incomplete accounts of actions not fully understood by the people who performed them. It’s no more than the best we can do, and often it falls short of that.”

https://www.goodreads.com/quotes/8624300-evidence-is-always-partial-facts-are-not-truth-though-they
Posted by Perseus at 18:43 No comments:

The authoritarian personality has a strict superego, which controls a weak ego that is unable to cope with the strong impulses of the id. The resulting intrapsychic conflicts cause personal insecurities, which result in the superego adhering to externally imposed conventional norms (conventionalism), and unquestioning obedience to the authorities who impose and administer the social norms of society (authoritarian submission). The ego-defense mechanism of psychological projection arises when the authoritarian person avoids self-reference to the anxiety-producing impulse(s) of the id, by projecting the impulse(s) onto the "inferior" minority social-groups of the culture (projectivity), which are expressed by way of greatly evaluative and harshly judgemental beliefs (power and toughness) and rigid (stereotypy).

https://en.wikipedia.org/wiki/Authoritarian_personality#Criticism
Posted by Perseus at 16:19 No comments:

Therianthropy is the mythological ability of human beings to metamorphose into other animals by means of shapeshifting. It is possible that cave drawings found at Les Trois Frères, in France, depict ancient beliefs in the concept. The most well known form of therianthropy is found in stories concerning werewolves.
Posted by Perseus at 07:40 No comments:

Einstein: “If I had an hour to solve a problem and my life depended on the solution, I would spend the first 55 minutes determining the proper question to ask… for once I know the proper question, I could solve the problem in less than five minutes.”

“It is not the answer that enlightens, but the question.” – Eugene Ionesco
https://www.lifehack.org/articles/productivity/36-quotes-from-successful-people-about-the-wisdom-asking-questions.html 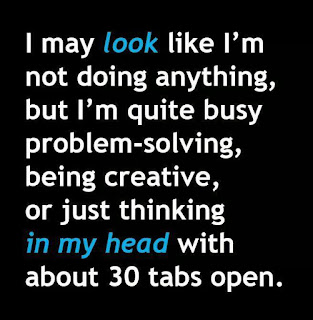 Venus spins on its axis from east to west, while Uranus is tilted so far over, it's virtually spinning on its side. ... But Venus and Uranus are the exceptions: they have what's known as retrograde rotation, spinning counter to the rotation of the Sun.

Neptune is the eighth and farthest known planet from the Sun in the Solar System. In the Solar ... Traces of methane in the outermost regions in part account for the planet's blue appearance. In contrast to the hazy, relatively featureless ..

Son of Poseidon
The planet Neptune is surrounded by a system of 8 moons. Most of these are tiny, with diameters of less than 500 miles. One of these moons, however, is quite large and warrants further investigation. This is the moon Triton. It was named after the Greek god Triton, who was the son of Poseidon (Neptune). He is usually portrayed as having the head and body of a man and the tail of a fish. This moon of Neptune was discovered by the British astronomer William Lassell in 1846. Since then it has been visited by only one spacecraft, Voyager 2, in 1989. http://www.seasky.org/solar-system/neptune-triton.html

The Backwards Moon
Triton orbits Neptune in what is known as a retrograde orbit. This means that it orbits Neptune a direction opposite the planet's rotation. It is the only large moon in the Solar System to do this. Astronomers are not quite sure of the reason for this retrograde orbit. Some believe that it condensed this way from the original material of the early solar system. Others think that Triton may have been formed elsewhere and then captured by Neptune's gravity. In fact, many astronomers have noticed that the surface features of Triton, as well as its size, are very similar to what they believe the planet Pluto to look like. Some even wonder if there is some connection between Triton's features and the fact that Pluto actually crosses Neptune's orbit from time to time. Just what that connection might be is anyone's guess at this point.

Only Earth's Moon, Saturn's Titan, and the four Galilean moons of Jupiter surpassing it.

Beware of the Fire Horse

The Horse is the seventh of all zodiac animals. According to one myth, the Jade Emperor said the order would be decided by the order in which they arrived to his party. Horse had to pass a cemetery on his way, but he was too scared. He hesitated for the longest time because running past it with his eyes closed. After he overcame that obstacle, he went at full speed and managed to arrive seventh.

Horses are free spirits who need space to be themselves.

Comment: then they become a bloody nuisance
Posted by Perseus at 07:38 No comments: