The Political Compass
If we recognise that this is essentially an economic line it's fine, as far as it goes. We can show, for example, Stalin, Mao Tse Tung and Pol Pot, with their commitment to a totally controlled economy, on the hard left. Socialists like Mahatma Gandhi and Robert Mugabe would occupy a less extreme leftist position. Margaret Thatcher would be well over to the right, but further right still would be someone like that ultimate free marketeer, General Pinochet. That deals with economics, but the social dimension is also important in politics. That's the one that the mere left-right scale doesn't adequately address. So we've added one, ranging in positions from extreme authoritarian to extreme libertarian. 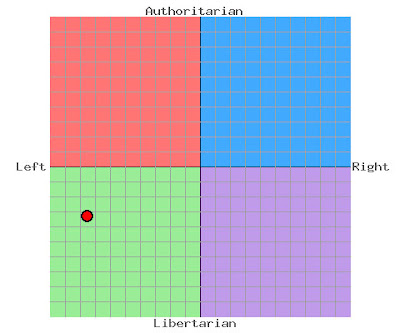 http://www.politicalcompass.org/test
Comment: It is the wrong way up. High brow (liberty-social) should be at the top and low life (authority ruled) should be at the bottom. The right represents property interests (ownership, possessions and violence).
INTP Forum thread:
http://www.intpforum.com/showthread.php?t=1013&page=2
Posted by Perseus at 07:48

Upper right of centre should be in the green not the red. Purple (upper left) is the Church.